Trains and Automobiles, but No Planes

Note: This is going to be a quick catchup entry as I am behind more than usual from taking a night off through being tired and also from getting sucked into a YouTube video. In the event you were not aware, these posts are usually a a couple days behind reality, but so am I most of the time.

The day dawned bright and fair as we headed out of Portmeirion towards the north of Wales.  Our route took us through the Snowdonia National Park, Snowdonia being the tallest peak in Wales.  As usual, the scenery was gorgeous as we wended our way along a little two lane road that afforded a few white-knuckles moments for me and caused Debbie to grab the handle over her window. 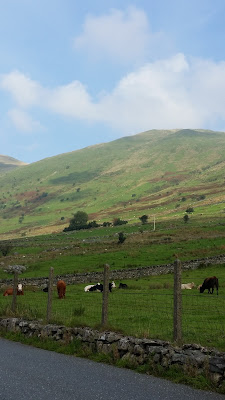 At this point, you can see the landscape changes as the brilliant greens are giving way to gold and brown - the brown being bracken.

Eventually, there was a local on my tail that obviously knew the road and wanted to drive faster, so I pulled off to let him by.  The silver lining here, was that I chose a train station parking lot to pull into.  We decided to stretch our legs and as we read the boards along the carpark, discovered that it was a stop along the route of one of the many steam locomotives that still run here in Wales.  Legacies of the past and now used as tourist attractions.   As luck would have it, one was due in 5  minutes.  As we moved towards the platform, we could hear the sounds of its approach echoing up the valley though as yet, we couldn't see it.

Soon enough, it rounded the bend and rolled into sight.  We stood on the Passenger bridge over the tracks as it rolled under us into the station and I was overcome with the nostalgia of the smell of a coal powered train.  As a child, on summer vacations back in Pennsylvania, my grandfather would take us to ride on the Strasburg railroad, "a 9 mile round trip to Paradise (PA) and back".  The train was in station for a little over 5 minutes, but I had the luck to talk with the young engineer and discovered that he too had been to Strasburg and ridden the narrow gauge train there.  The UK is a train aficionado's Mecca.

Our next stop was on the Isle of Anglesey, specifically, the little town of
LLanfairpwllgwyngyllgogerychwyrndrobwllllantysiliogogogoch which is 58 letters. The actual name is Llanfairpwll, but during the Victorian era due to a promotional stunt, it was changed.  It translates from Welsh to English as "Saint Mary's Church in a hollow of white hazel near the swirling whirlpool of the church of Saint Tysilio with a red cave" and is now the second longest one word palace name in the world.  The title for the longest one word name goes to
Taumatawhakatangi­hangakoauauotamatea­turipukakapikimaunga­horonukupokaiwhen­uakitanatahu which is 85 letters and means "The summit where Tamatea, the man with the big knees, the climber of mountains, the land-swallower who travelled about, played his nose flute to his loved one".  Not to be outdone, the U.S. holds third place with the 45 letter one word lake name Chargoggagoggmanchauggagoggchaubunagungamaugg which means "Fishing Place at the Boundaries – Neutral Meeting Grounds".  But I digress. 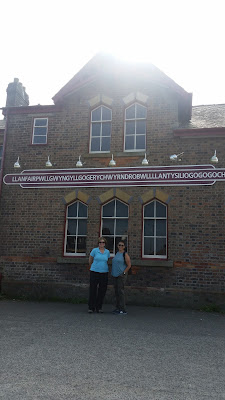 Our final stop for the day you was at Conwy Castle in Conwy, Wales. A medieval fortification built in only 4 years beginning in 1283.  The Castle changed hands between the British and the Welsh several times.  It was very large and very impressive.  Surrounding the old town, the original castle wall still stands and has been incorporated into modern use age. 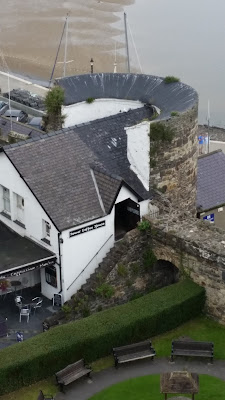 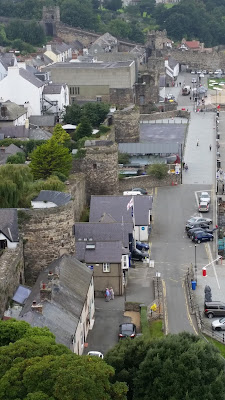 Oddities for the day.  The 12 little battlements sticking out along this section of the Castle wall, where actually communal medieval toilets.  They were a later addition to the castle by Edward I built as a convenience for the gentlemen of his wardrobe (think medieval logistics officers).  They were installed at the cost of £15, which is the equivalent of £45,000 in today's £. 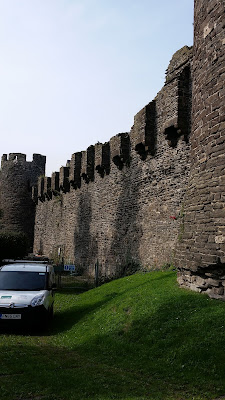 Last but not least, is this.  I'm really not sure what this is about.  Is it meant to be a collection of those little scented tree shaped thingys?  Hoarding behavior for the car?  Or perhaps like Jelly Bellies, when you eat a cola flavor bean and a cherry flavor bean, it tastes like a Cherry Coke?  Perhaps this person is creating a Strawberry Pinetree scented car?   I'm just not sure, but that's an answer I'll never know. 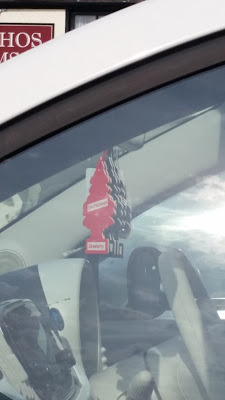