I Once Spent A Week in a Car

Looking back on yesterday, the old W.C. Field's line comes to mind,  "I once spent a week in Philadelphia one night."  Yesterday was one of those weeks, a long day behind the wheel of this. 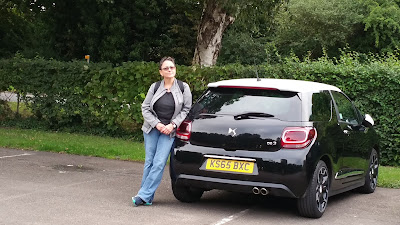 Yes, it's  a Citroën.  It looked kind of jaunty there in Zone 2 of the rental car lot.  I had my misgivings about it being a dog for acceleration, but it actually has some zip to it.  This is especially important during those times when I'm struggling with driving here in the UK.  Debbie asked if she could ride in the trunk because she didn't want to watch, but I told her that wouldn't work because the luggage is in there.  She told me we could move it to the back seat and I countered with the argument that I needed someone to tell me to shift into first when I'm waiting for the light to change.  That finally got her to concede to sitting up front with me.

We drove from outside Cardiff to Portmeirion.  About 6.5 hours of actual driving with a few pleasant breaks.  One was for lunch. 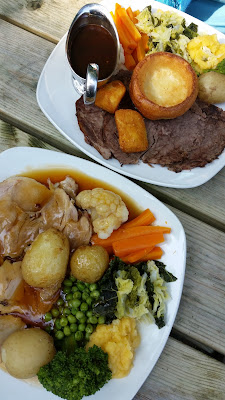 Other little stops along the way were made ostensibly to take pictures, but really to let the locals get by our car.  This driving isn't easy.  We're often on narrow two lane back roads, winding through tall hedgerows, up and down hills, lots of blind corners.  We've learned that when the stripe that separates the lanes disappears, the road gets even narrower and two cars have to work carefully to pass each other.  Here's a good picture of one of those "one lane" roads taken at one of our "unscheduled" rest stops. 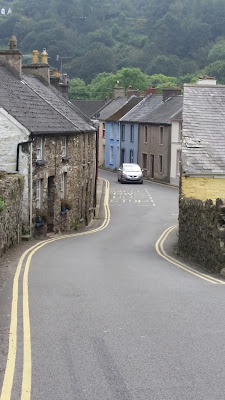 And another view along the way. 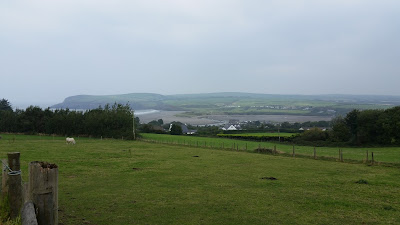 Wales is absolutely beautiful.  Even with the overcast and mist, it glows green and eternal, quietly thriving in a kind of off the beaten path kind of way.  The hillsides can be quite steep and are covered with fields that are "tiled" across the landscape with dark green grout lines consisting of hedges and small trees.  In some of those fields, there are specks of white that are grazing sheep.

Next scheduled stop was Aberstwyth, Wales.  Known for its colorful townscape as you can see here.  Most of the houses were brightly painted, but there were a few that were more subdued. 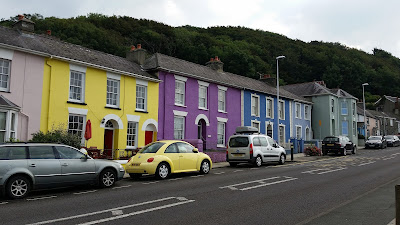 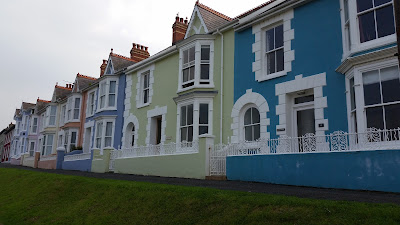 We walked around a bit, visited the harbor (low tide), walked up the main street and I even managed to skim a few of the flat beach rocks in the Atlantic Ocean. We then hopped back in the car to push on. 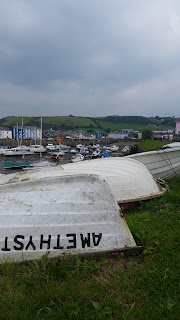 We finally arrived at Portmeirion by a few minutes after 6p having left our B&B in Cardiff about 8 hours earlier.  What a magical place.  More about that tomorrow, but here's a teaser. 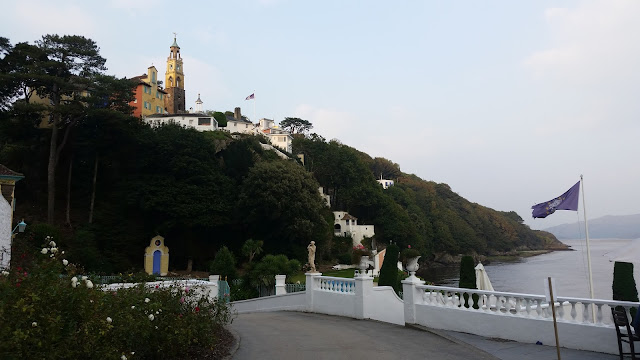