Driving on the Wrong Side of the Road

The flight over on British Airways was non-eventful, but certainly not the most pleasant international flight I've been on.  The flight attendants were affable and if you weren't sure whether you wanted red or white wine, they simply chucked a bottle of each at you and slammed the trolley a little further down the aisle.  Drinks as well as meals landed on your waiting tray with a definite plunking noise.  I had the GF dinner - chicken, rice, mushy veggies and the usual rice cake wrapped in plastic wrap standing in for a real dinner roll. Debbie, my traveling companion, had the tortellini.  We each came away with a 250ml bottle of red and she also had a little bottle of vodka too.  She must have been especially pleasant to the server.

Our flight landed a little after noon and we proceeded through Border Control easily enough.   After taking the shuttle over to the Europecar rental building, we got to pick out our car.  Oddly, the deal here was "Pick any car in Zone 2, the keys are in the ignition."  As we perused our choices, another dripping wet car would be parked afresh in Zone 2, which caused further delay in making a choice. All this while jet after jet rumbles LOUDLY down the runway in a takeoff maybe 1/4 of a mile from us.

We finally picked a two tone Cirtröen and then tried asking for directions out of the airport and onto the correct motorway.  Surprize...or should I join the British and say Surprise?  No map.  Just some directions jotted down on the back of the map they do have that shows where one is in their parking lot.

Needless to say, we managed to get out of Heathrow and onto the M4 headed west by about 14:15.  The destination, Bourton-on-the-Water in the Cotswolds.  All in all about a 2 hr drive.  Driving in the UK is easy enough on the motorways when everyone is going the same direction as you are.  It's when you get off the motorways, have to negotiate the left and right turns from the left lane and OMG the freaking traffic circles everywhere.   I've driven manual transmissions through France, Germany, Switzerland, Italy, and Brussels using traffic circles before, but the combination of driving on the left side of road from the right side of the car, the gear shift on your left and a crap load of traffic circles is overwhelming after being up for over 24 hours.  Obviously, I didn't kill us both, but Debbie's left eye is still twitching from yesterday's car trip.

We had a light supper before checking into our room at the Mousetrap Inn.  Needless to say we were both sacked out by 8p, exhausted after the first day of travel.

The big coup for the day was discovering just HOW to put the car in reverse.  This skill comes in very handy when your car is sideways in the road trying to maneuver a U-turn in a narrow country road.

The payoff moment for the day was walking around the village before sunset with most of the tourists gone for the day. 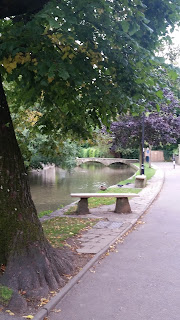 The oddest thing seen yesterday was this hand dryer in the bathroom of the Baggage Reclaim hall at Heathrow.  It was easy enough to work.  You inserted your dripping wet hands under the icon showing two hands.  The warm air immediately begins to blow the water off of your hands and onto the angled metal piece in the picture.  The water is then both pushed by the air and pulled by gravity across the metal, both forces causing the water to begin to drip down the slanted surface towards the edge.  The whole time I'm watching this and wondering at what point the floor in front of this contraption becomes covered by a growing puddle.  As there was nobody really using this bathroom, it was perhaps moot, but I think that the logic here was that the rapidly moving hot air obliterated any moisture into thousands of little beady drops that then magically disappear.  I can neither confirm or deny it's efficacy as there were not enough test cases and only a quarter size wet spot on the floor.  Given the elegant Dyson hand dryers we sometimes see in the states,  I was baffled by this one. 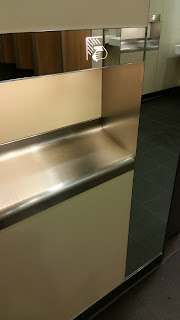 Tomorrow, we sightsee here in the village and then take our lives into our hands once again and drive into Wales.
Posted by beebokay at 4:42 PM