This is how we started the day, so this is how I'll start today's installment... 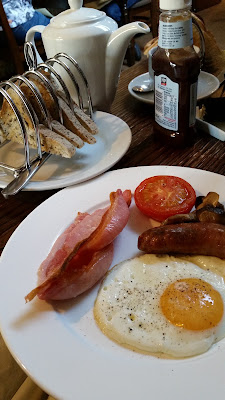 Breakfast at the Mousetrap.  They even had a GF sausage and toast for me yippee!  After breakfast, we threw the luggage in the boot (look it up) and drove down to the car park near the model village hear in Bourton.  I'd shared a post about it a couple of months ago and I must admit that was more or less the inspiration for this trip.   Well, that and an Alaska Airlines double mileage offer...

The exhibit didn't open until 10, so we had about 30 minutes to kill.   We took the time to walk through the parts of the village outside the hard core tourist zone.  Very tidy, quiet little village consistng mostly of  little houses made of Cotswold stone, a yellowish sandstone.  Here' s a twofer photo showing both the stone and an interesting statuette set in the front wall up high under the eaves as seen in the second photo.  I also tossed in a few obligatory "cute" shots taken in the village. 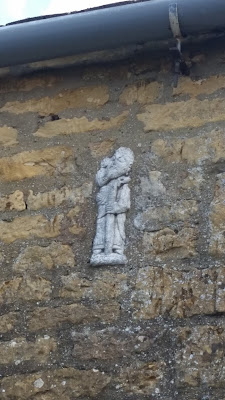 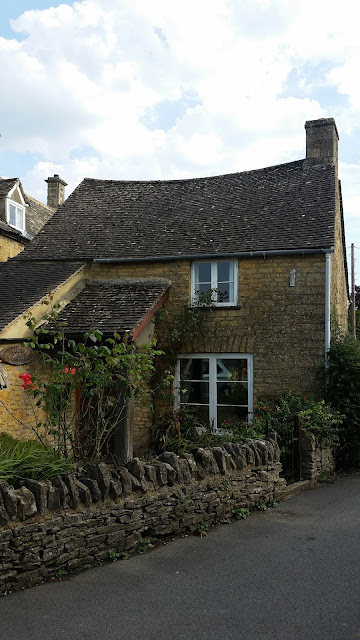 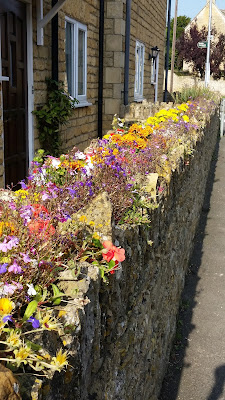 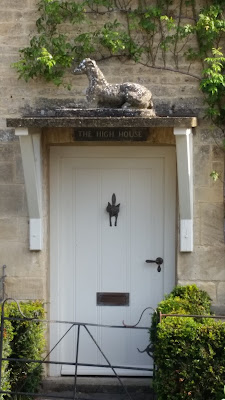 Determining we'd killed enough time we returned to the model museum.  This museum contains 1/9th scale replicas of various buildings in the village.  More of that story can be read here.  www.themodelvillage.com/ 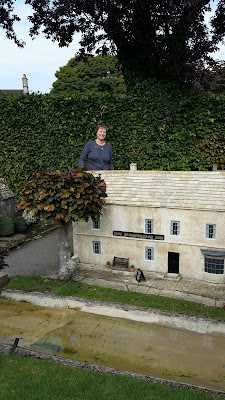 Debbie playing hide and seek behind the house. 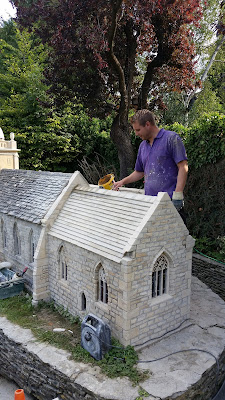 This gentleman is a full time employment of the Model village.  He told us that he'd been working on the restoration of this building for 6 months and that he had about 8 more weeks to go.  After that, he indicated that restoring the church behind me was his next task.  I'm thinking that might be a cool job to have for a short time and Debbie's thinking "no way". 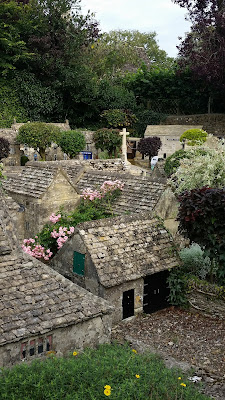 I thought this was charming with the King Kong size pink rose growing over the back of it.  The next two photos are offered as a visual gag. 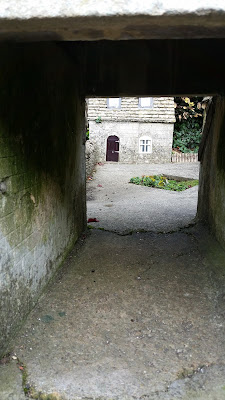 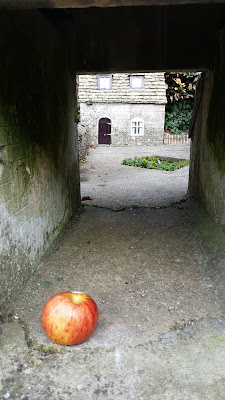 After the Model Village we went walkabout and used one of the many local footpaths available to visit a village called The Slaughters.  Picture of me in front of the old Mill there. 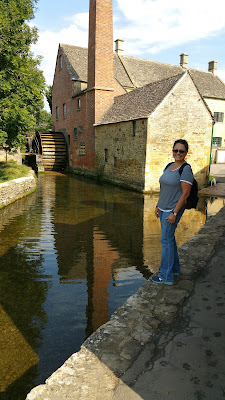 The humidity has been on the somewhat unpleasant side since our arrival, but the paths through the woods and fields provided us a way to take advantage of the shade and a pleasant breeze.  We passed fields with horses and walked through a field with a flock of sheep.  This was really cool, but took some careful treading to avoid the many piles of sheep poop littering the path. 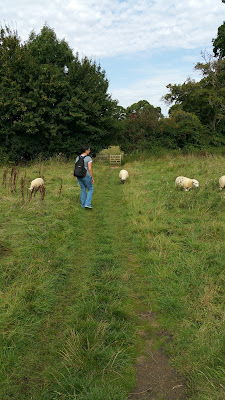 A brisk return walk, a stop at a grocery store and off we went to Cardiff in Wales.  This was about a 1.5 hour drive during which Debbie's right eye began twitching also.  We visited St. Fagan which is a national exhibit of dwellings that have been brought from all over Wales in one outdoor exhibit.  The exhibit is intended to chronicle the historical lifestyle, culture and architecture of the Welsh people.  The part we liked best was a row of Iron worker's terrace houses that had been decorated in the style common for different years, 1805, 1855, 1900 and just after WWII.  The whole thing was fascinating.  We arrived late in the day, so many of the places had already closed as the weather had dampened their usual turnout.

Another 40 minute drive to our B&B that included a hair-raising drive up a two lane street with many small businesses.  What was the big deal?  Parked cars  effectively made two lanes into one lane with cars trying to go both ways.  That was our first episode of that fun, but sadly, not our last.

After that experience we decided to walk to dinner.  We chose Moksha in town.  Wonderful Indian restaurant.  My dinner came in a contraption that looked like it was last used in a trapeze act, but it was very tasty meal.

Another successful day in which we survived and thrived.  Accomplishment for the day was beginning to shift gears more smoothly in and out of those #$##@@&&$##$$ traffic circles.