Crashing back to Earth

I've seen so many very interesting things here and learned so much also.  Last night I went to Tooting Bec (I love that name), which is a section of London where there are a lot of great Indian restaurants.  My landlady took me out there.  The food was great and the restaurant was full of people from all over India.  Shradha, my hostess, was telling me which part of  India they were from based on the way their saris were wrapped or their hair ornaments.  It was fascinating.

We talked about remodels, houses, what Bellevue is like, etc.  When we got back she invited me into her four floor home and she shared all of her plans for the future.  She's quite an animated lady, full of positive energies and projects.  She is a radiographer by profession and assists women with fertility issues using ultrasound and a supportive positive attitude. 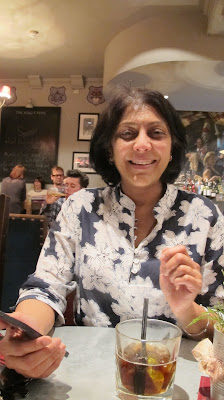 Next week she is going to Spain to walk 100 miles on the pilgrimage to Santiago de Compostella.   It's her version of my London trip.   She was explaining how she has an 80 year lease on their home which was built about 150 years ago.  She then was talking about the improvements she wanted to make to it which started a whole other conversation about why.  If she doesn't own the place, why would she spend money to put in say, a new kitchen?  She explained that there are two levels of "ownership" I'm calling them.  There is the freeholder who actually owns the property on which the building stands.   Then there are the people who buy the lease on the units within the building.  I'd say that the lease is less expensive than our houses, but our houses are way less expensive than the freeholders cost.  She said that the freeholder's purchase price on the houses just down the road from the pizza place on the opposite corner of the intersection are between 5.5M to 6M GBP.  Now take that figure and multiply times the exchange rate of 1 GBP = $1.50 US.  That's a lot of money...but the bright side is that here in London, they get there trash picked up more than once a week.  :)  The white units along the road are the ones she was talking about. 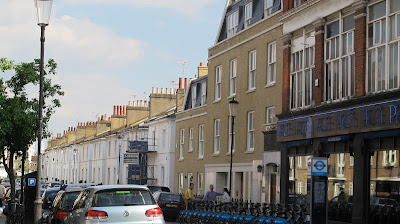 I saw this on the way to Kensington Palace this morning.  Tell me if you could make an Aston Martin that James Bond would drive, why would you build one that looks like a Smart Car? 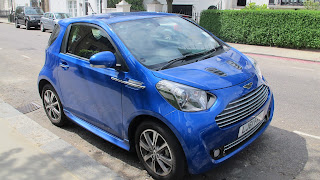 Another item I've been meaning to share this week is the outlets here in this flat.  The UK has these rather large 3 prong plugs, but the cool thing about the ones here is that they have switches on them.  You can turn the switch on and off at the plug, which CAN get a bit confusing if you also have a wall switch.  Think about it.  There are 4 possible settings for the two switches and only one of those settings will actually make the item plugged into the wall work.  It took me a while to get the hang of this even though it seems like it could be a good thing to have...especially with small children. 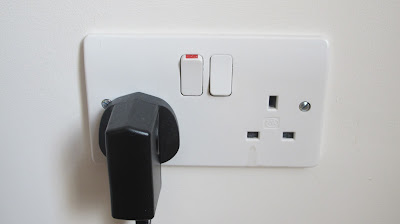 Other typical things I've seen.  Here is a picture of one of the pubs in the heart of a nearby neighborhood.  It's usual for a popular pub to have more occupants than there is room for.  No worries, they just pile out into the street and occupy the sidewalks.  In this instance they also were sitting on a wall across the street. 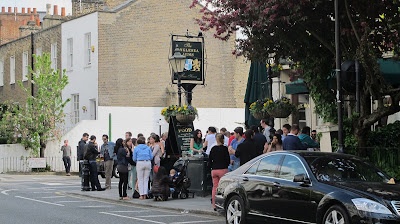 On my perambulations today, I walked into this cheese shop to get this shot.  OMG, the smell was overpowering in there.  That's a lot of stinky cheese in one place! 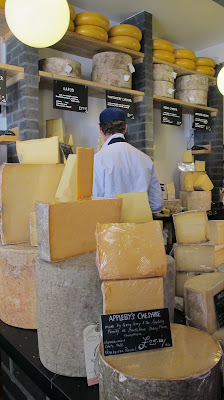 Last photo is my "arty" shot for the day.  I took this through the window of an antique shop up near Notting Hill Gate. 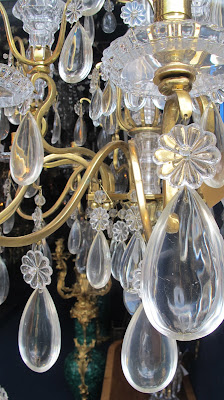 Note to self.  Never, ever, ever get sucked back into your work email before you return from vacation.  Nothing can kill a wine buzz faster than viewing unpleasant things at work from a distance.
Posted by beebokay at 12:34 PM