Next I take up smoking

I give up.  We've been so busy each day that I am sooooo far behind on this blogging bit. I enjoy doing it, I love that my family and friends can armchair travel with us, but it just keeps getting harder every day to go back in time and resurface what occurred in the past.

Our days start with breakfast between 8 and 9 in the morning and then we pack the car and off we go.  We usually drive at least 2 hours to some attraction near where we will stop for the night and then spend anywhere from 1.5 to 3 hrs going through that venue reading every sign, plaque, etc.  Afterwards, we locate a coffee shop and have decaf and a small treat.  More driving puts us at our stop for the night and we check in between 5:30 to 6:30.  About 30-45 minutes in our room before we head out for dinner which takes us about 1.5 hours to fully enjoy. Back to our rooms, semi unpack, get ready for bed and then I blog...unless I'm simply too tired to do so.  The driving takes it out of me.  There is just no way to describe that frisson of anxiety that courses through my whole body when a large truck (lorrie) comes lurching around a blind corner on a narrow little back country road - or even one with a dotted line...

New tack, you're just going to get what I write.  Novel idea, eh?

The day started out sunny and breezy as we left the B&B about 10a to drive out of the Scottish Highlands and head for Glasgow.  View from the room this a.m. 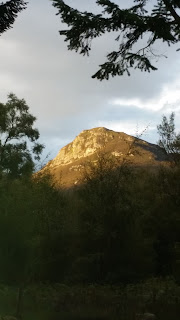 We stopped at Pitlochry to investigate a Whiskey Distillery and go on a tour.  The first stop on the tour was the tasting room with a video about Edradour, "Scotland's smallest distillery".  This is one of the few that still use manual methods to produce whiskey.  There we are at 12:40 in the afternoon drinking two different whiskeys.  The first time I've tasted whiskey in fact. One was a whiskey cured in a sherry barrel - their Edradour 10 year old whiskey.  The second was their Ballechin  (bal like in balance -uh -kin).  The latter was very peaty/smoky and of the two, I liked it best, which perhaps is not saying much.  Sitting there trying to do my best to drink whiskey for lunch, I wondered if I would next take up smoking to go with my new, foul whisky-drinking habit.  I'll have to pass on both I fear. 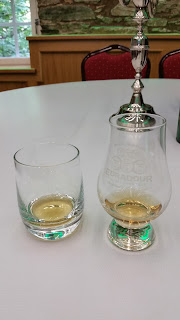 Below is a chart showing the various characteristics of whiskey as laid out by experts.  Some of these are pretty humorous and indicate to me that I will never be serious about any of this.  I particularly think that "sweaty" under the Feinty category and "stagnant" under Sulfur are enough to choke one up. 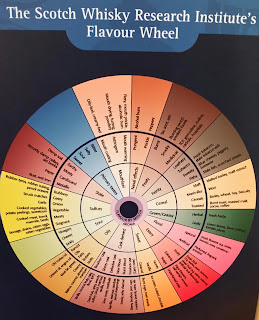 This is where whiskey made at Edradour starts.  Each day a ton of dry, malted barley from a large plastic bag like this is ground up and then mixed in  a huge vat with very hot water and rehydrated. 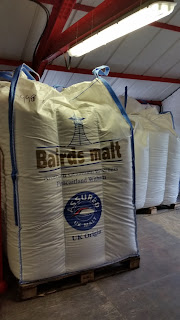 The malting of the grain takes place off site in a special facility for a variety of health and safety reasons.  The next step is to separate the solids from the liquids.  The remaining solids are given to local farmers as it still has value as fodder. 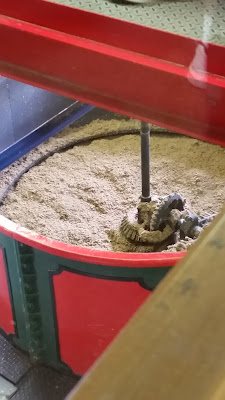 Next, the liquid is placed in a large vat and yeast is added.  On the top is today's  batch with yesterday's below.  Lots of fermentation going on. 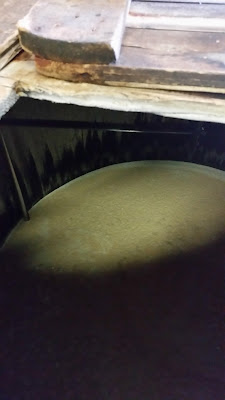 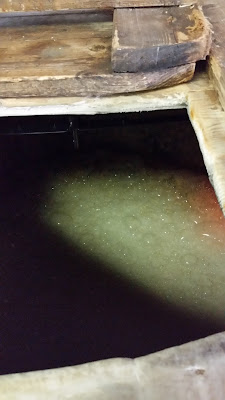 The liquid is then heated again and run through two distillations, one for each of these tanks. 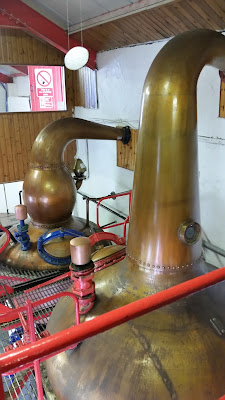 Each of these has a 10' condensing coil immersed in a cold water tank on the outdoor side of the wall to the right.  The resulting spirits are then run off into a tank for further cooling and then put into barrels and labelled.  At this point and for the next 3 years it is called spirit.  After 3 years, the distiller has the right to sell it as whiskey.  At this distillery, it stays in the barrel for at least 10 years and loses up to 25% of the alcohol, which is called "the angels share".  They asked us not to use any flash photography in the storage building as they said it could start a fire. 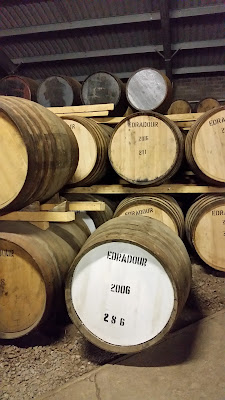 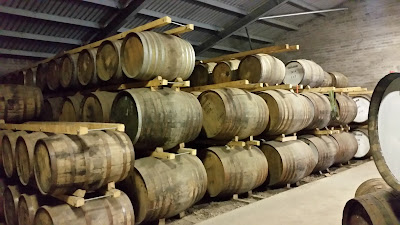 Last but certainly not least.  The admiration and jealousy for the distillery owner who has the imagination AND the money to experiment with different marketing ideas.  One of his ideas is to use different barrels, previously used for making wines.  Sauterne, Barolo and Bourbon to name few.  Each type of barrel lends a different color and flavor to the whiskey.

Another "sideline" is that he has been travelling around Scotland and different distilleries and buying up old stock.  He is then bottling it under a new label called Signatory Vintage.  Whiskey drinkers, eat your hearts out. This stuff ain't cheap.  I inserted this photo as large as I could so that you all can read it and weep. 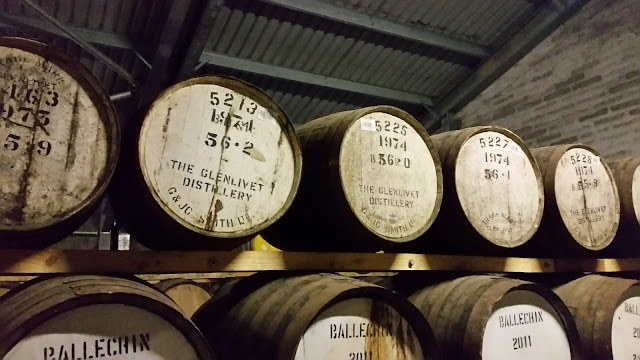